Linking Sicily to the Italian mainland has been a dream since Julius Caesar was a boy – but now it could be about to come true.

Cable Cars could operate between Sicily and the Italian mainland, saving the government several billion euro into the bargain Image by Martin Pettitt / CC BY 2.0

According to a team of engineers and architects, the best way to bridge the 3.3 kilometres across the strait of Messina is by giant cable car.  Italy and Sicily have been separated since the last Ice Age and recent plans to build the largest suspension bridge in the world now seems dead in the water. Architects and engineers believe they can surmount the problem with their aerial tramway.

If the designs by Massimo Majowiecki were to become operational, the Local reports that people would be able to cross the 37.5 kilometres from Reggio Calabria Airport to Messina in under half an hour. The Bologna-based architect has already been an integral part of a number of Italy’s iconic construction projects, including Milan’s 2015 Expo and the new Juventus stadium. A member of his team, architect Giambattista Ghersi, told The Local the tramway could be built much more cheaply than a bridge.

It would need an allocation of around €700 million whereas the bridge would require €8.5 billion to construct -  over 12 times the cost. The cable car concept is to have three distinct sections. One would be almost 20 kilometres running along the coast of Calabria. It would then turn across the strait for 3.5 kilometres. The final segment length of 13.5 kilometres would run from the Sicilian coast to Messina. The cable cars would be pitched at a height of 20 metres over land and 70 metres when travelling across the sea.

The government was forced to put plans for a bridge on the back burner in 2013 after decades of false promises. Mr Majowiecki believes the tramway can be an answer to years of problems and finally realize the ambition of linking Italy and Sicily. At present, there are ferry crossings for both trains and cars to Messina, Sicily, from Reggio Calabria.

Russian's simple design for metro lines in Paris could be… 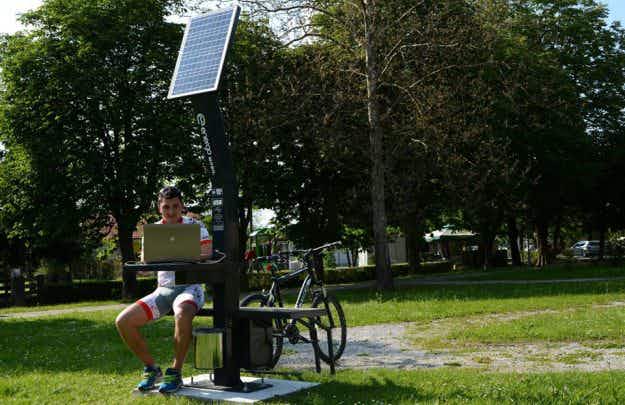 Croatian bike riders to get innovative 'recharge benches' on cycle…