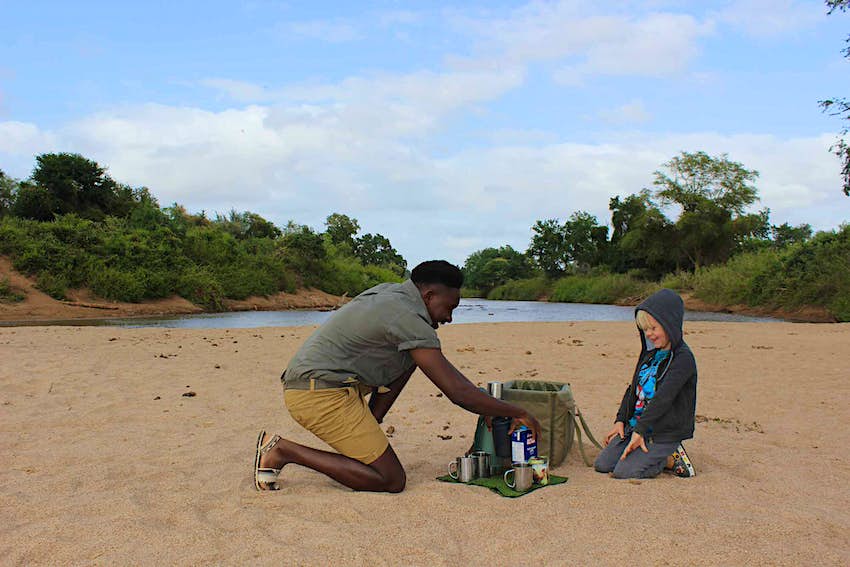 What’s the story behind this photo?

It was actually taken on Kai’s fifth birthday at Crooks Corner, where South Africa, Zimbabwe and Mozambique meet. We were on a morning game drive in the Makuleke Concession at the northern tip of Kruger National Park and stopped for morning coffee in the dry river bed of the Limpopo River with crocs and hippos in the Levuvhu River behind us.

After coffee, our guide, Cyril (or Cereal, as Kai calls him) could see that Kai was getting a bit fidgety on the game drive so he did something that appeals to most five-year-olds – he gave us a poo safari! There was plenty of poop from different animals scattered around and Kai loved breaking open the dung to see what was inside.

I love this photo as I think it really shows how great Cyril was with Kai. Cyril is young and doesn’t have children yet, but he really knew how to engage a five-year-old. All of the staff at Pafuri Camp, where we were staying, were great with Kai – which really helped us have a relaxing break.

We saw plenty of animals, but the one thing that sticks in Kai’s mind – the first thing he told his teacher about when we got back – was this: ‘He ate poo!’ At the end of Cyril’s ‘poo school’, he popped a piece of impala poo in his mouth, much to Kai’s delight.

It’s important to remember that while kids love animals, they don’t necessarily love sitting in a car or jeep for three hours. Definitely get a kid-friendly animal book to keep them engaged: we got a colouring book of African mammals and used it as a checklist while we were on the drives.

We are heading to Brazil early next year, which will be Kai’s 10th country.

When we shut the front door ready to go and travel as a family, we always make sure we have...

…Rumble! Rumble is Kai’s stuffed rhino. He’s been with us since the day Kai was born and he goes everywhere we do. We were hoping to find Rumble’s mummy and daddy on this trip, but despite Cyril’s best efforts we didn’t spot any rhinos this time around. The other thing we’re never without is a notebook and crayons so that Kai always has something to keep him busy when needed.

Beaches, rum and nature: the 9 best places to visit in Puerto Rico

8 min read • Published about 5 hours ago

2 min read • Published about 11 hours ago

4 min read • Published about 14 hours ago