Georgia O’Keeffe: Living Modern opened earlier this month, and is the first show of its kind to showcase the artist’s persona through her wardrobe and other personal items. “The most interesting thing about the exhibition is that it’s about her as a person, not her work,” New York City resident Melissa Liebling-Goldberg told Lonely Planet after visiting. “Her clothes were fascinating — she sewed her own for a long time, and she was very much the master of her own image.”

Garments like softly draped dresses, denim jeans, and clean cut button-downs reflect the minimalism and simplicity that often characterized her artwork. Jewelry and accessories are also on display, as well as a selection of paintings and an extensive collection of photographs of O’Keeffe taken by famed photographers, including her husband Alfred Stieglitz, Ansel Adams, Cecil Beaton, Bruce Weber, and Annie Leibovitz.

The museum’s guest curator, Wanda M. Corn, explained her inspiration behind the exhibition. “Fifteen years ago I learned that when Georgia O’Keeffe died and left her two homes to her estate, her closets were filled with her belongings. The O’Keeffe Museum in Santa Fe now owns the homes and their contents, but no one had yet studied the sixty years of dresses, coats, suits, casual wear, and accessories she left behind,” said Corn. ”The Georgia O’Keeffe who emerged from my research and is presented in this exhibition was an artist not only in her studio but also in her homemaking and self-fashioning.”

The exhibition is part of the ongoing project Year of Yes: Reimagining Feminism at the Brooklyn Museum, which celebrates the 10th anniversary of its Elizabeth A. Sackler Center for Feminist Art with a series of 10 exhibitions, including Jeremy Deller’s Iggy Pop Life Class.

Get the top travel news stories delivered straight to your inbox every weekday by signing up to our newsletter.

Emirates offers a workaround to the laptop ban by collecting… 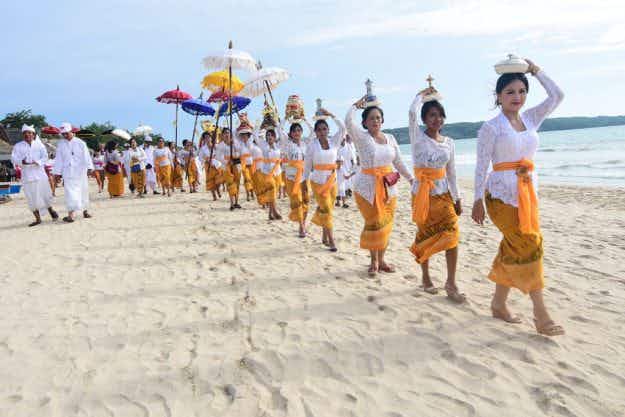 As Bali falls silent for Nyepi, here's everything you need…