The tallest moving observation pod in the world is due to open for visitors in Brighton this week.

The British Airways i360 offers panoramic views of up to 26 miles away.

The beautiful British Airways i360 is a futuristic, fully enclosed viewing capsule that offers 360 degree views across 26 miles of Brighton and the South Coast of England.

The pod can hold up to 200 visitors at a time and goes to a height of 138 metres. Image by British Airways

It will enable groups of up to 200 visitors to glide to a height of 450 feet in the hand-crafted glass pod. The journey takes from 20 to 30 minutes.

The pod even houses a bar for guests to enjoy a refreshment while they take in the views. Image by Kevin Meredith

Twelve years in the making, British Airways i360 is the brainchild of architect entrepreneurs David Marks and Julia Barfield of Marks Barfield Architects, best known as the firm that designed the famous London Eye attraction. The capsule of the i360 is ten times the size of those at the London Eye.

The project took over 10 years to complete and was the brainchild of the architecture firm responsible for London Eye. Image by British Airways

The famous flocks of Starlings at Brighton Beach contrasted with the i360 observation tower. Image by Kevin Meredith

The British Airways i360 is constructed from materials sourced from nine different countries, with the steel tower materials coming from the Netherlands, the glass from Italy and the dampers from Australia. As well as boasting a record for being the world’s tallest moving observation tower, the i360 now holds the Guinness World Record for the world’s most slender tower.

Brighton has a long tradition of expressing its identity through dynamic architecture, with landmarks that include John Nash’s 1787 Royal Pavilion as well as the world famous West Pier that was damaged beyond repair in two serious fires in 2003.

The pod has a beautiful view of the remnants of the West Pier, which was originally created in 1866 to the plans of Eugenius Birch. Image by British Airways

Visitors can even enjoy a drink at the Nyetimber Sky Bar while on board the British Airways i360 as they take in the panoramic views.

The West Pier was originally designed with an open deck supporting six small ornamental oriental-style houses and glass screens at the pier head to protect visitors from the wind and sun. Image by British Airways

Tickets are priced from £13.50 for adults and from £6.75 for children, while kids under four years old can go for free.

Dumpster dinners spread to San Francisco with the Salvage Supperclub… 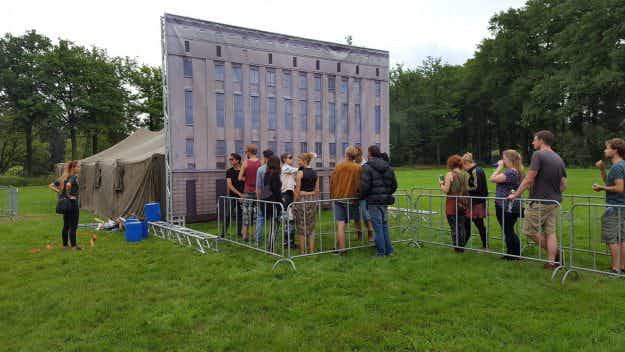 A festival recreated Berlin's famous Berghain nightclub... and no one…