What happened after this man won a competition for the best job in the world?

The man who won a dream job as a tropical island caretaker nearly a decade ago has revealed that he's swapped his dream job - for an even better one. Englishman Ben Southall, hit the headlines in 2009 when he beat off competition from 34,000 applicants to become caretaker of Hamilton Island, on the Great Barrier Reef. But, after the six month contract on the job expired, Ben was determined not to return to his job in events management - and bagged a job exploring the most amazing places Down Under for the Australia New Zealand tourist boards.

Ben Southall and his wife, Sophee launched The Best Life in the World, last year with an incredible 34,000 mile journey from Singapore to London. Image by Caters News

Now, he and his wife, Sophee, who he met while travelling, are now paid to travel around the globe as part of their travel blog, The Best Life In The World. The pair complete challenges in and around the world's most beautiful places - including longboarding around Tasmania, and a 54,000 mile journey from Singapore to London in a mustard Landrover. Ben said: 'Life is pretty cool when you can work, live and travel with the person you love but even then it can also throw up a few testing situations.  The benefits are you get to enjoy and share the experience of some of the world's most stunning places together.'

The writer and photographer is currently on a mad mission for charity to travel 1000 km across Tasmania on just a longboard. Image by Carters News Agency

'Being stuck in an office all day, everyday would bore me and I've no idea how people stick to the same job for a decade or more.'  Since Ben got hitched to aspiring globetrotter, Sophee McPhee five years ago they have not stayed still, becoming one of the most enviable couples on the internet. Sophee has her own travel blog Sophee Smiles where she documents her personal journeys around the globe.    Ben said: 'Sophee and I met whilst I was emceeing an awards ceremony in the Whitsundays, where the Best Job in the World was based. Last we drove 54,000km from Singapore to London in my old Land Rover for our own project - Best Life in the World.  It was something that naturally followed after Best Job with so many people telling me they had the Best Life, and not me.'

Sophee has earned a living from her own travel blog ever since ditching her dull desk-job in publishing in her home city of Brisbane. The writer and photographer is currently on a mad mission for charity to travel 1000 km across Tasmania on just a longboard. According to Sophee: 'The daily humdrum, predictability and lack of freedom were really starting to bring me down. Constantly trying to create content in some of the world's most beautiful locations can be challenging as you struggle to find the patience to get it right every time.'

According to Ben, the benefits are in getting to enjoy and share the experience of some of the world's most stunning places together.  Image by Carter News Agency

'More often than not we're trying to get the perfect picture with no-one else in it. Having air conditioning fitted to my 1986 Land Rover was probably the best move I could ever have made for reducing stress in hot humid climates! Sometimes though the idea of being on a working holiday all of the time, blogging, filming and photographing can mean long days and nights.'

'This leads to more than a little frustration to get it all published and to keep partners and sponsors happy. I'm sure there's one day in the future when I'll head back to the UK as my friends and family are all there and I do honestly miss them, but I don't miss the dark days and long nights of winter at all.' 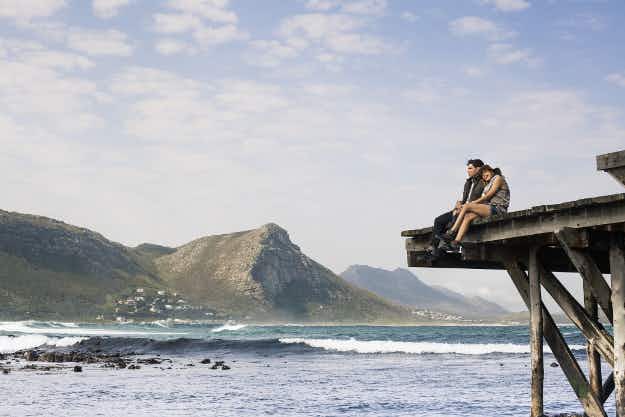 Valentine’s Day Airbnb bookings are more popular than ever in…

This road trip itinerary will take you to a pet-friendly…