A colourful illuminated trail of giant endangered animal sculptures will light up the forecourt of Taronga Zoo in Sydney, as part of this year's Vivid Sydney festival. Now in its eighth year, the Australian festival is recognised as the largest event of its kind in the world, combining light, music and ideas.

Taronga’s 10 Legacy Species multimedia sculptures — some the size of a two-storey house — have interactive lighting, sound effects and moving parts, and they represent ten critical species from Australia and Sumatra that non-profit organisation Taronga is committed to protecting, including the Asian elephant and Corroboree frog. Designed by Ample Projects, they will illuminate the zoo's forecourt at night, and are among the largest and most technologically advanced lanterns to feature in Vivid Sydney, which runs from May 27 to June 18.

'Be the Light for the Wild' also includes a supporting cast of echidnas, cicadas, chameleons and funnel-web spiders, along with thousands of smaller lanterns made by NSW school students as part of Taronga Zoo’s centenary celebrations. Every ticket purchased helps to support the zoo's wildlife conservation efforts.

Vivid Sydney was voted Australia’s 'Best Event' in 2013 and 'Best Tourism Event' in 2013, 2014 and 2015. This year's programme features Vivid Light, which presents large-scale light installations and projections; Vivid Music, which offers music performances and collaborations including Vivid LIVE at the Sydney Opera House; and Vivid Ideas, the home of creative ideas, discussion and debate. All three celebrate Sydney as a creative hub of the Asia-Pacific. 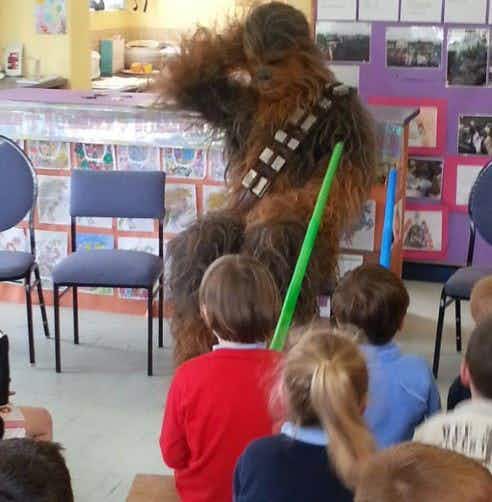 "Are you real?" Chewbacca takes a break from Star Wars…