Commissioned by the Public Art Fund in celebration of its 40th anniversary, the project will include both small and large scale fences in locations across New York City, including at the Essex Street Market on the Lower East Side, Cooper Union on Astor Place, Flushing Meadows-Corona Park in Queens, and in Central Park.

The work, which takes its name from a Robert Frost Poem entitled Mending Wall, is inspired by the international migration crisis. “With Good Fences Make Good Neighbors, [Ai Weiwei] challenges us to think about the function and rationale for a common barrier,” New York City’s First Lady Chirlane McCray said in a statement. “Given that the immigrant experience is at the core of what binds us as New Yorkers, the exhibition compels us to question the rhetoric and policies that seek to divide us.”

Ai Weiwei, who was an immigrant in New York in the 1980s, has worked in a numerous mediums, from sculpture and photography to architecture. In recent years, several of the artist’s exhibitions have focused on the migration crisis, with a studio on the Greek Island of Lesbos in 2016 and an installation in Vienna, floating over 1000 refugee life jackets in the shape of lotus flowers in the pond outside of the city’s Belvedere Palace. “The fence has always been a tool in the vocabulary of political landscaping and evokes associations with words like ‘border,’ ‘security,’ and ‘neighbor,’ which are connected to the current global political environment,” said the artist. “But what’s important to remember is that while barriers have been used to divide us, as humans we are all the same.”

In its 40 year history, the Public Art Fund has exhibited works all around the city by Jeff Koons, Yayoi Kusama, Alexander Calder, and Keith Haring, among countless other artists. Good Fences Make Good Neighbors will be on view from 12 October 2017 to 11 February 2018. 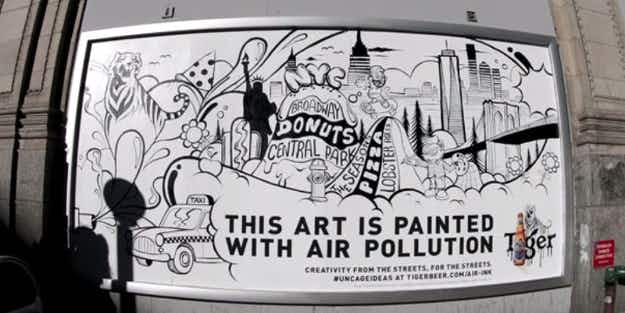 This incredible street art is painted with ink made from…

Watch skateboarders inside one of Detroit’s most opulent Art Deco…