How one woman cycled 7000km across South America with no money

Some people develop a sense of adventure over time, while others are born with it - and 23-year-old Laura Bingham definitely falls into the former category. She's just arrived back - yesterday, to be exact - from a 7000km cycle from Ecuador to Argentina with absolutely no money. It's not the first adventure she's been on, nor will it be the last, but it was certainly difficult without any cash.

What does that say?! What does that actually say?! HELLO BUENOS AIRES AND THE END OF THESE 5 MONTHS WITH NO MONEY! #booyar powered by @astsystems @goreapparel #lazerhelmets #argentina #southamerica #expedition #adventure #cyclingtour #cycling #theendisinsight

So how on earth did she manage? "Through the sheer generosity and kindness of others and being ingenuitive with ideas!" she says on the phone from her base in London. "There were hard and good patches, but no doubt about it, without the kindness of others I wouldn't have been able to do it. I brought spare clothes with me so that if I stayed with a poor family and they helped me with food or shelter, I'd have something to give them in return. I'd volunteer on farms, ask at bread shops for leftovers at the end of the day, and ask at restaurants for any spare food."

Laura's fiancé is well-known adventurer Ed Stafford, and he along with Sir Ranulph Fiennes were Laura's patrons. She said that Sir Ranulph expressed concerns about her travelling alone, and so arranged for his acquaintance Cho to go with her. "He accompanied me for the first two months but there were some cultural differences and we found we didn't always get along. I then did two weeks alone, after which I found that being alone and female was a bit too dangerous, so my fiancé came and then other people popped in during the latter months for weeks at a time."

I absolutely adore this photo that was taken in Asuncion, Paraguay. I made such amazing friends there! The Mennonite Christians are the most loving incredible people I've ever met. @genesisbikesuk @outdoortech @rab.equipment @rideshimano #photoshoot #stars #nightsky #cycling #cyclingtour #adventure #southamerica #amazing #friends

Now that she's home, Laura says that it feels "bizarre, almost like it was all a very surreal dream that never really happened," but that that's down to the fact that she's still processing such an epic journey. "It really make you realise the importance of the kindness of strangers, of a smile. When you’re alone with no money and nowhere to sleep, a smile can mean the world."

Laura says her next adventure is getting married - in two months, she'll become Mrs Stafford. But where does an adventurer go on honeymoon? "Er, Devon!" she laughs. "We'll go somewhere else eventually, but for now it'll be nice to stay in England."

"I did this because I think there are a lot of young women out there I can encourage, and show them what is possible. You don’t have to stay at home, there are just as many opportunities for a woman as there is for a man. On Instagram someone said I inspired them and they want to get out there and travel, and it touched me so much."

Laura kept a journal on her travels, and will be writing a book now she's home, so watch this space. And in the meantime, you can follow her on Twitter and Instagram. 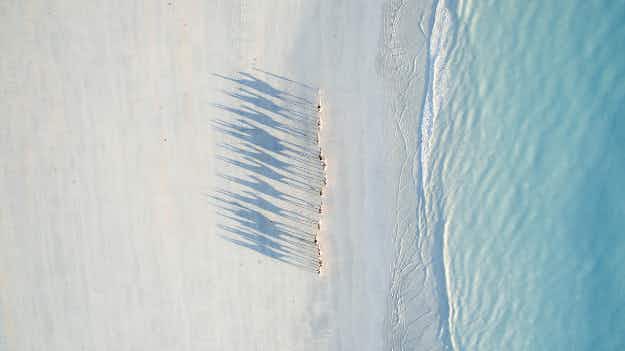 See the winning images from the third annual International Drone…

Slovenia's Ljubljana Castle will screen films under the stars all…